Once in a while, I get around running network scans to check what devices and ports are open on my network. The proliferation of IoT devices in my home, combined with lack of VLAN capabilities of my router, has upped my uneasiness in the recent times.

There are two modes of scans I often run

All devices on my router have to be manually mac address whitelisted before they are able to connect to either the internet or be used internally. There is also a separate network interface for guests that are barred from the private network.

arp is a handy command that allows listing of all mac addresses on the current network. I use this often for whitelisting and verifying devices.

nmap is much more versatile, but also verbose and so I use it sparingly. I do perform network scans in two modes

The following command scans the entire /24 of the current subnet. It produces a report of all open ports.

For a much more detailed scan, I want to inspect a specific IP address, all its open ports, the services running and potentially the OS as well.

Its good to get the nonfiction list out of the way as its pretty short. I enjoyed every single one of them. They were light, informative and useful.

This was the largest series I have ever read. A grand total of 10 books. It is incredible how my perspective changed over the course of this epic, as it went from "I hate this" to "What there isn't any more of this"

This is a follow up to Part 2 and Part 1 of my Mark2 design and build of Plant watering system.

Fortunately the first two learnings can be incorporated by some software changes. Following are the goals I set out to accomplish in the new firmware and the code to achieve it.

Mark 2 provided fair amount of learnings. However it was plagued with limitations. Here are some improvmenets planned in Mark 3 re-design

This is my first app that is published on both Android Play Store & Apple Appstore platforms. Despite React Native's brittleness and shortcomings, the productivity I experienced while working with it was phenomenal. I think I might just migrate all my old "pure" Objective-C apps to RN.

Really happy with how it turned out. Am even proud of what my lackluster design skills managed to churn out. The apps were built as a companion to the web version that my friend built (me.cmdr2.org/starlink)

What do you think?

... or simply making the damn terminal content persist when I seek any form of --help or run git diff.

I don't know whoever thought or why they thought that alternate screen was a sane idea is beyond me. I'd do a git diff to check my commits and promptly forget the specifics by the time I get to writing the commit message. Same with the python REPL's help function. The frustration was the kind that builds up like a thousand paper cuts, each seemingly an insignificant occurrence, only day you suddenly find yourself quadriplegic. It doesn't make any sense.

By changing OSX's terminal from xterm-256 to vt100 (Preferences → Profiles → Advanced → 'declare terminal as') I have been delivered into the sweet arms of salvation and from inflicting cuddles of frustration on my cat that has been patient (for a cat) with me through this ordeal.

Am writing this down here because I seem to run into this every few years and promptly forget how I ever managed to get rid of this pest. No more alternate screen, no more, not until this blog and OneNote chose to go away atleast.

Update 1: Oh god, that was terrible in its own right with vim becoming color blind, which sent down on yet another wild goose chase. So the next solution is to configure the pager, which you better hope is less everywhere

Now the side effect has been magical of man pages and --help now showing up line numbers! I'd call this a success (for now).

I enjoy learning new things, especialy if I am able to either build something out of it or put it to use to improve my life. Here are some things from the top of my head that I managed to learn or start learning in 2019.

Tech/Programming
Learning new technologies is a never-ending endeavour. I built at least one public-facing hobby project starting from zero with the following:

Food & Cooking
I think I can make a reasonably decent meal out of many of these without having to look at a recipe while making-do in case of missing ingredients.

After running the Mark-1 prototype for a week, I wanted to scale up this effort for more of my plants. However efforts to prototype on a PCB blank were a complete mess, so I decided to jump the gun and build Mark-2. 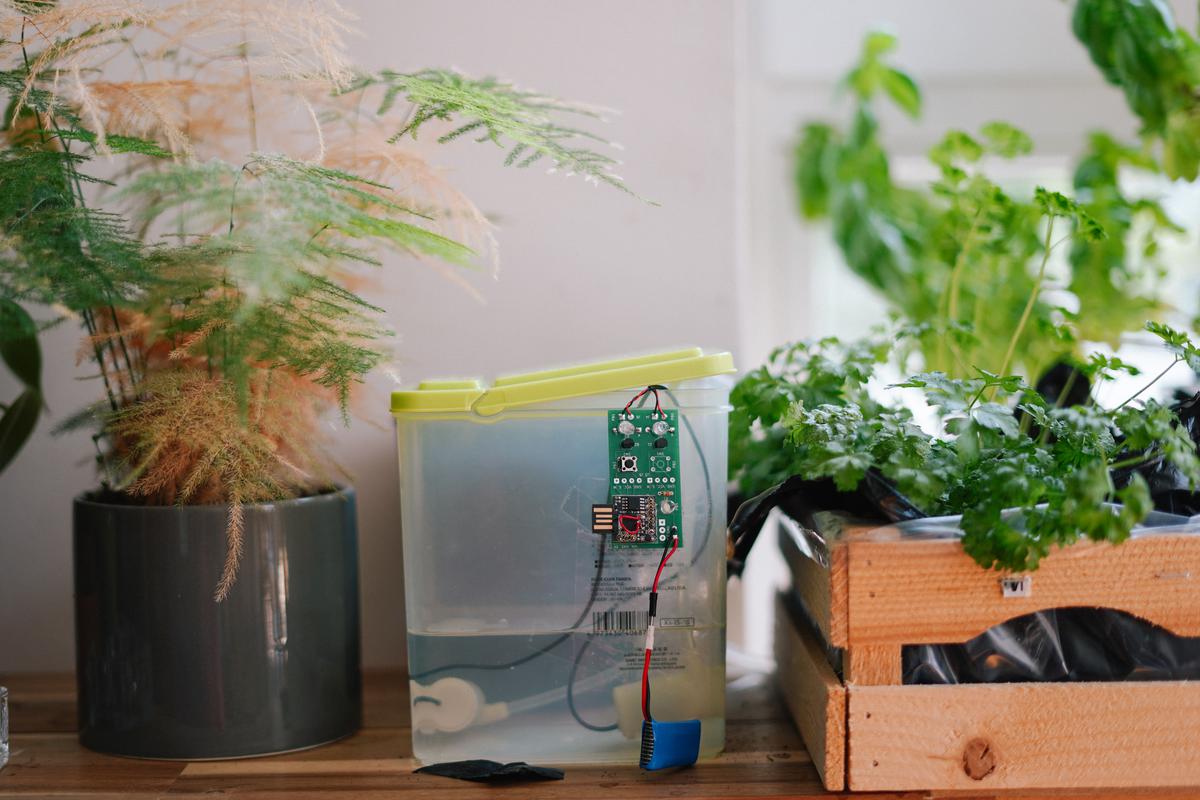 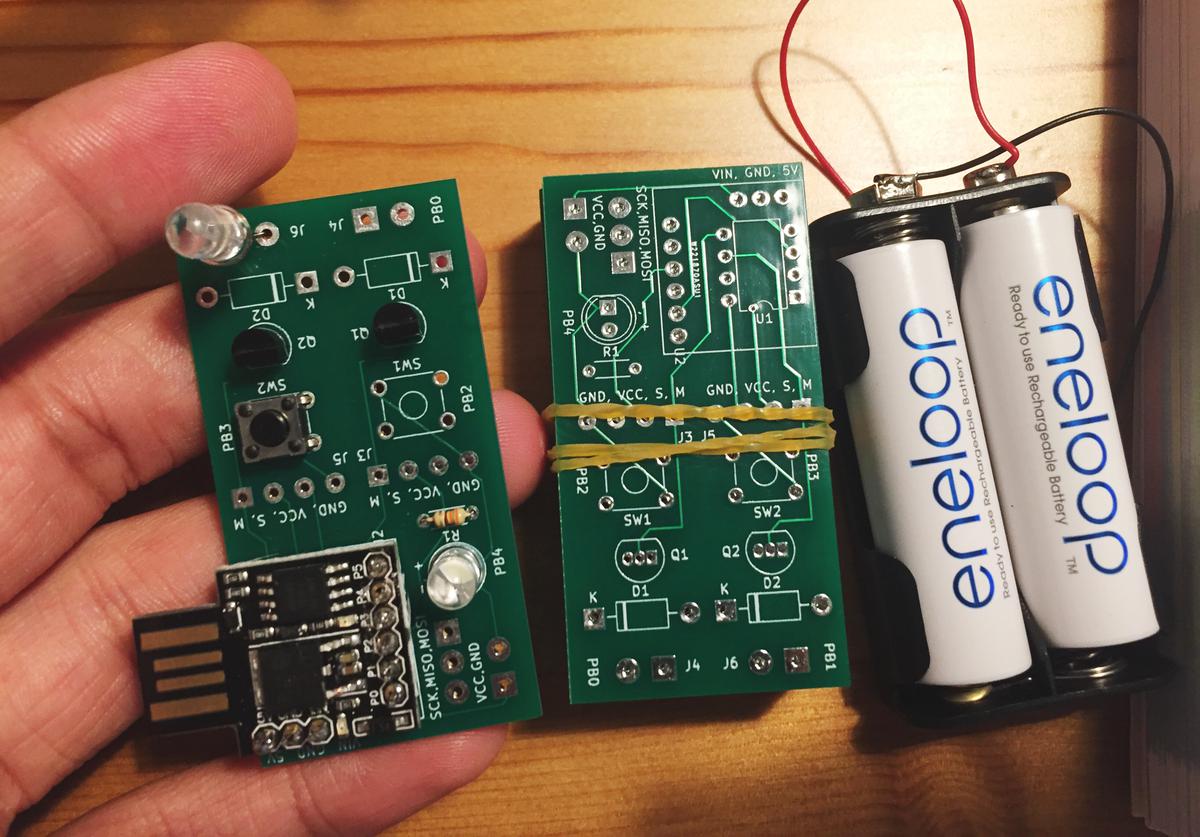 It was clear that running one MCU per plant was not effective, at the same time I wanted configurability and thus compromises had to be made. 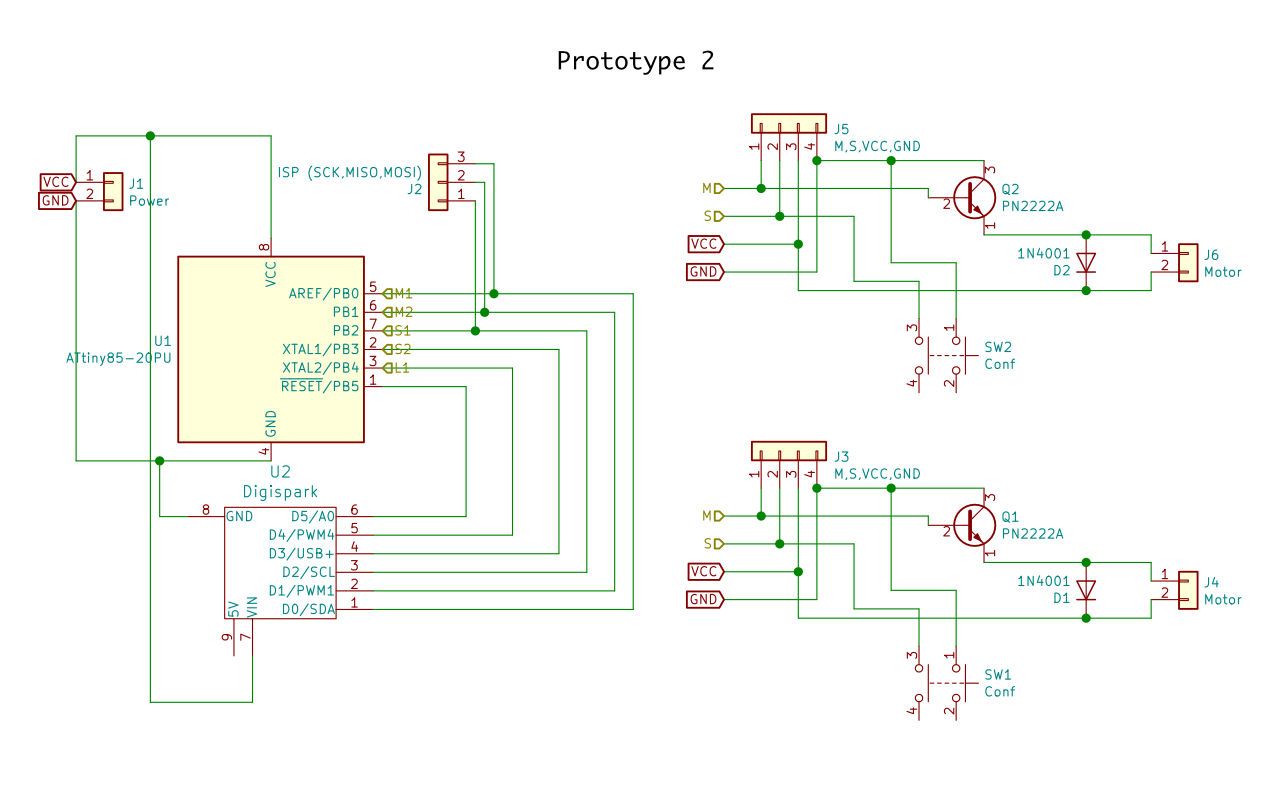 I used the "Save/Restore Layout" plugin to do the same in PCB mode. 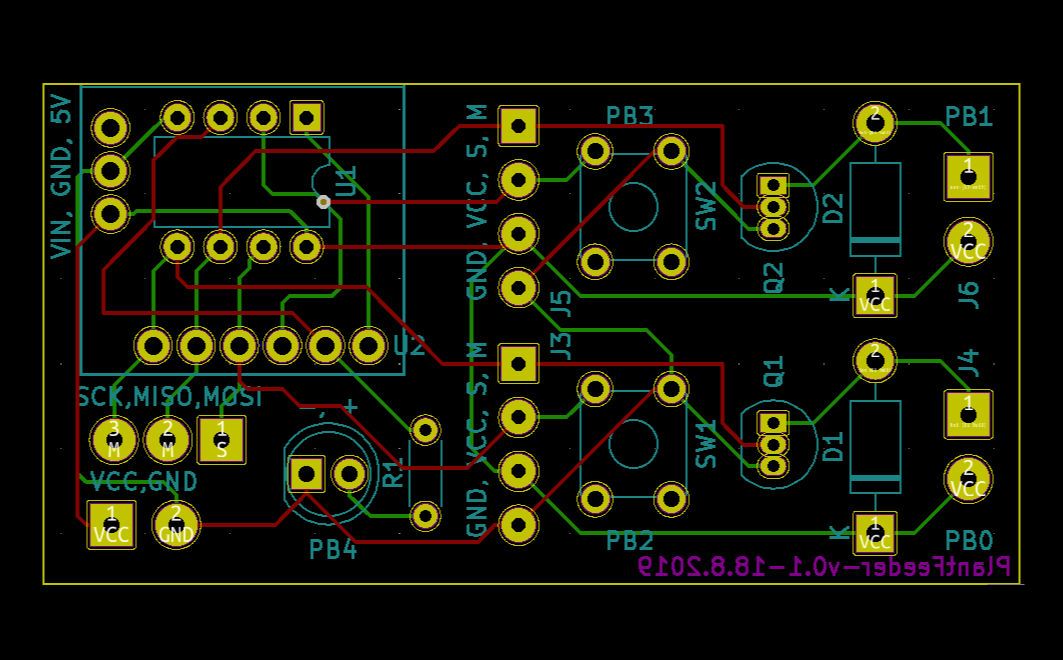 It turned out that the use of a push button without a pull down resistor makes it unusable, due to which am now relying on manual programming.

The duration is programmed to be 2 seconds of watering for every 2 hours, which appears to be adequate for my basil and coriander plants

The code itself was similar to earlier version.

The final step was to export Gerber files, containing Image/SVG representation of all individual layers such as copper front and back, silkscreen for info, soldermask, vias, etc.

A key element of design that I missed during first iteration was the edge cuts which is the SVG layer outlining how the PCB has to be cut.

All the exported files were zipped and sent to pcbway. The fabbed PCBs arrived less than a week later. As shipping was the most expensive part of the process, I might perhaps combine multiple designs into a PCB order so they arrive together.

Install plugins by copying files from

As I finally found sometime at hand, I decided to attend to one of my long standing projects to automate watering of my plants, which have been through stressful troughs of famine and crests of over-watering. 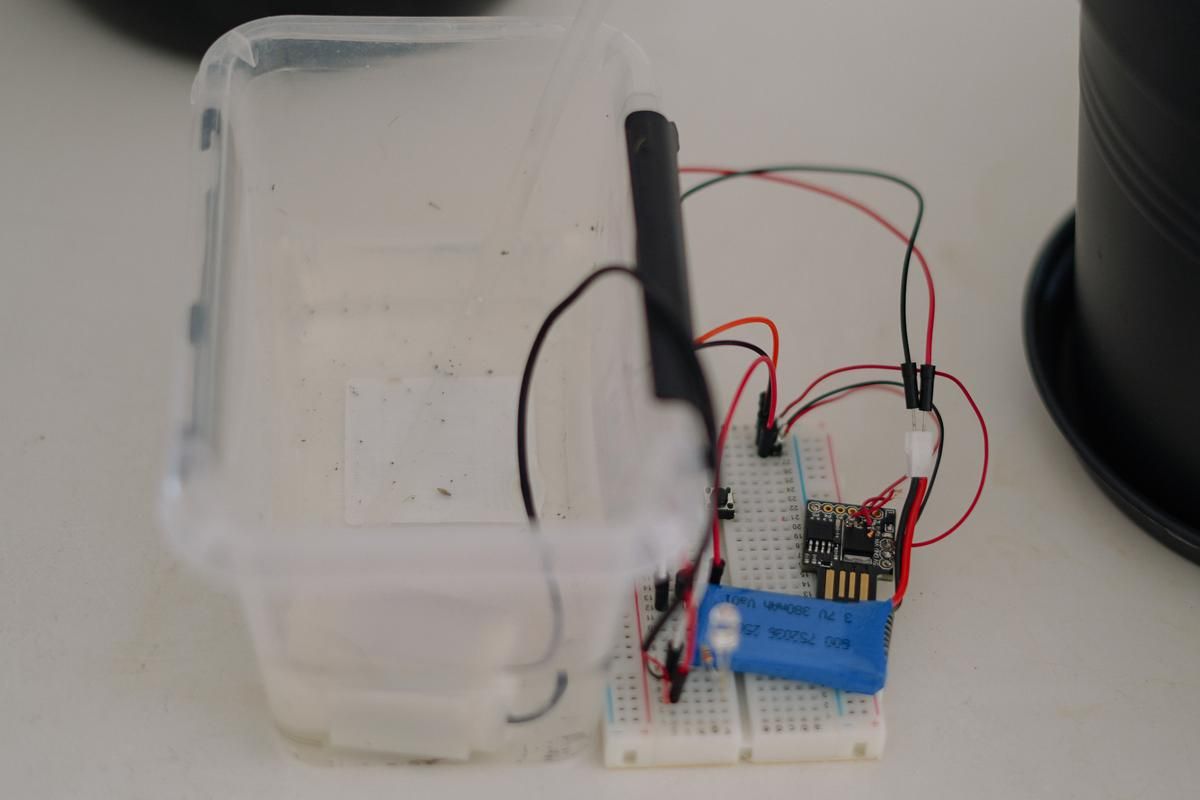 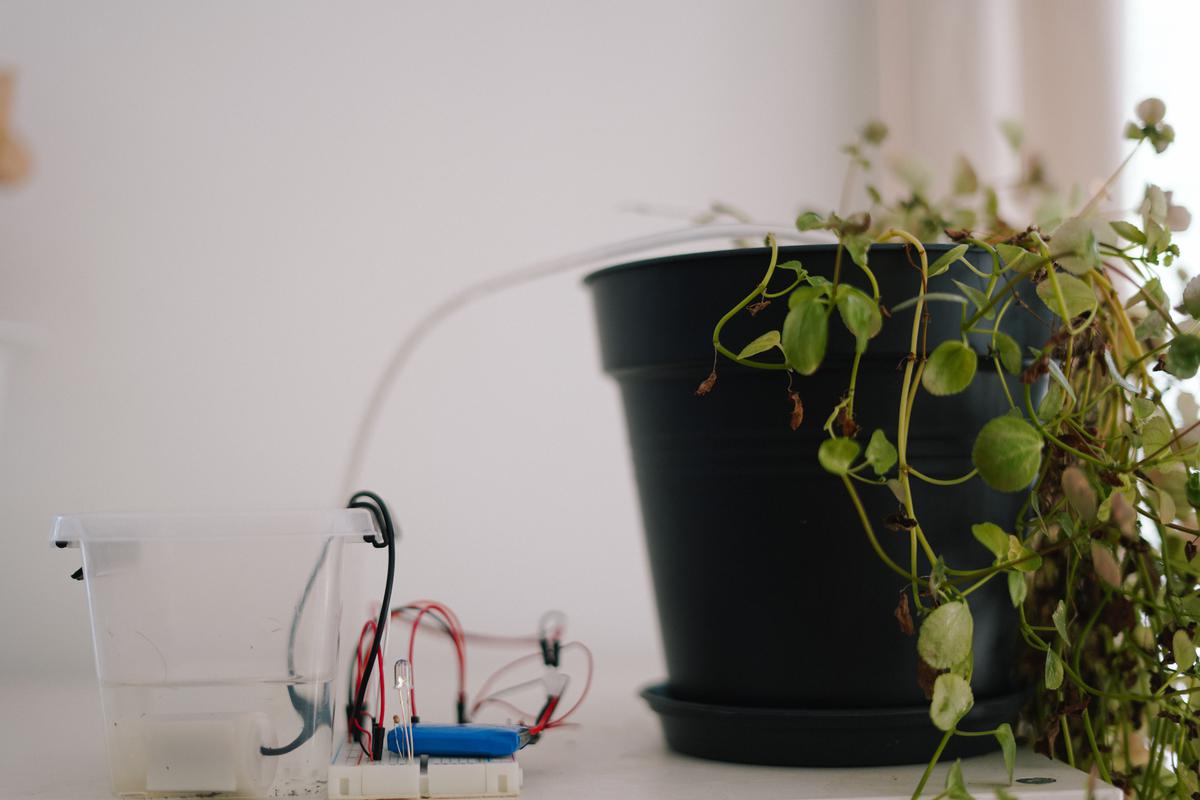 One of the goals were that the system should last long enough while running off a battery. Secondary goals was the use of soil moisture sensors to optimize further.

Its a straight forward circuit with the MCU's output controlling the P of NPN Transistor. The Transistor serves to amplify the current as the DC motors are rated at 200mA while Attiny85 is only able to deliver few milliAmps of current.

I modified Digispark Attiny85 by disconnecting the onboard voltage regulator as it consumes ~1mA of current even when the MCU is in deep sleep. As Attiny85 is rated from 2.7v-5.5v the 3.7v LiPo's 4.1v output would be well within the required voltage range. 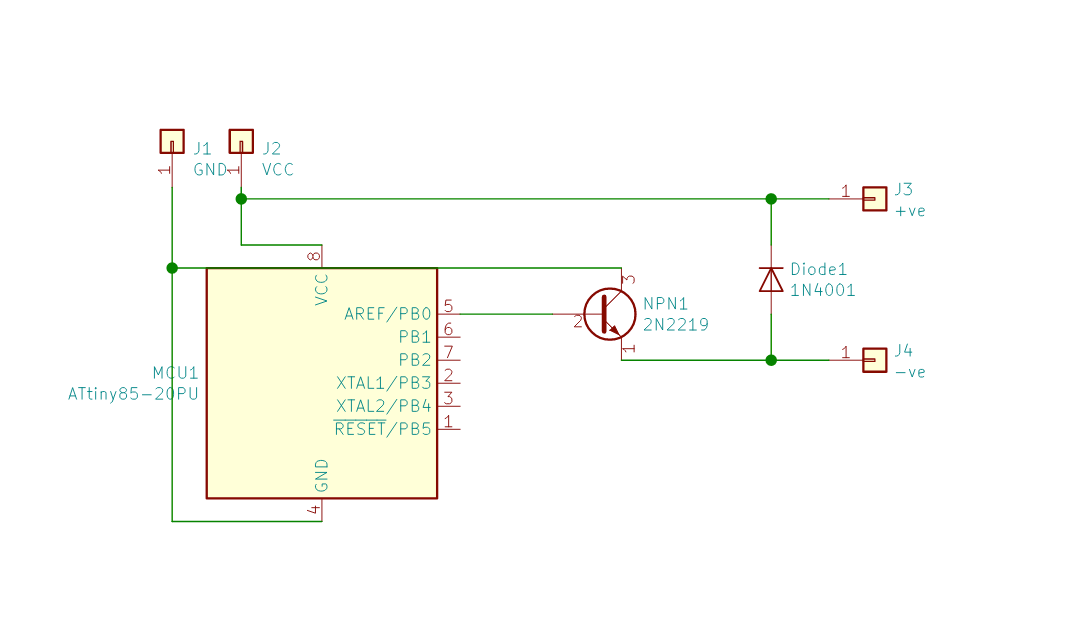 The MCU is programmed to wake up every second via a watchdog timer interrupt. On wake, it checks if it needs to turn on or turn off the output, performs it and goes back to sleep. This means the MCU is asleep even when the motor is running. The ON/OFF state is maintained with the count of wake up cycles rather than milliseconds - this works as each sleep cycle is 1 second.

Digispark's Attiny85's fuses are set at 16Mhz but the input is not exactly stable due the absense of voltage regulatr, this can lead to drift in timekeeping of few minutes per day.

Am listening to audio for practicing dutch comprehension, which essentially consists of a collection of short sentences on repeat. However this audio is available as a single track and for the purpose of shadowing, I wanted individual mp3's.

This detects the average silence level and uses it to split.

Over the past few weeks, I've taken to recording my Squash games using my Gopro to understand areas of improvement. The video is recorded at 1080p and 60fps, however Gopro splits the video into several large sized mp4 files.

I wanted to combine them together into a single file and re-encoded to reduce the file size significantly and ffmpeg came to rescue.

First order is to combine the files. ffmpeg accepts input text file with each line consisting of the object type ( file  in this case) and the file name. Alternatively it also accepts http and a url as a line item as well.

To reduce file size one can do several things. The easiest is to set the crf flag which indicates "Constant Rate Factor" or the quality of encoding with values ranging from 0 to 51.  0 indicates lossless encoding and 51 the opposite. The default value is 23